For Blackmon-Farrell, time is money. The commercial electrical contractor saved both when it switched to Egnyte, improving workflows and productivity. 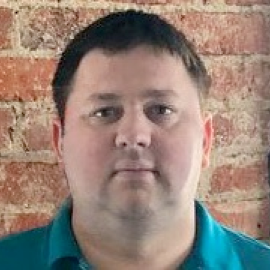 "Before Egnyte we were spending $70 to $80 per user per month just on mobile data charges. Now we are down to $30 per user. That’s a savings of upwards of $600 per year per person."
Mike Yatteau
VP of Operations • Blackmon-Farrell

Founded in 1981, Blackmon-Farrell is a commercial electrical contractor based in Rochester, New York. While it handles a range of industrial, municipal, and commercial construction and installation needs throughout New York State, its core business exists in design-build and bid spec projects—90% of which are for state and local government. Its work is highlighted by projects at the Blue Cross Arena, the Monroe County Hall of Justice, and the Rochester Institute of Technology.

As a specialty contractor, labor efficiency is Blackmon-Farrell’s biggest concern. Time is of the essence, and productivity gains are often measured in minutes.

“If we lose a day on a project—10 people all standing around—that ends up costing us a lot of money,” said Mike Yatteau, VP of operations for Blackmon-Farrell.

The company continually focuses on employee efficiency as a measurement of success, and it recently tackled a major business hurdle by going digital with Egnyte.

Bidding on public sector contracts involves mountains of paperwork. Everything from wire and conduit to fixtures must be documented, reviewed, and submitted to meet project specifications. Employees also had to spend considerable time on document-intensive processes, such as certified payrolls.

Blackmon-Farrell managed all of this manually, creating workflow challenges and wasted manpower. To close out a project, a purchase order had to be completed and delivered prior to releasing the subcontractors. However, a single project could include over 100 open purchase orders, so someone had to track down the status of each one to confirm they were delivered.

Change orders were another tedious process that directly impacted the schedule. People had to go to the jobsite to get a measurement or comb through different versions of a drawing before they could put together an estimate.

While field teams were armed with mobile devices to access, view, and annotate Bluebeam files in real time, connectivity issues made the process extremely slow. Some teams carried personal hotspots as a fix, but they routinely exceeded their allotted data capacity in a matter of weeks, so their carrier throttled their bandwidth for the rest of the month. The cost was staggering—emailing large PDFs attachments had driven wireless data costs to at least $80 per month per user.

The resulting back and forth between digital and analog compounded the problem. Because of remote access issues, teams had to print four copies of the plan every time a project required a new set, which could cost as much as $2,000, not counting the cost of printers and ink deployed on jobsites. Other times, someone had to manually scan hundreds of sheets of sheets of paper to digitize large drawings.

Blackmon-Farrell needed a better way. They had to organize project files, make them accessible from remote locations, and reduce costs.

Egnyte’s simple file structure made file management easy. Blackmon-Farrell used standardized project folder templates and assigned a job number to each folder, which made it easy to know what content aligned to which project.

The firm streamlined the change order process by establishing a dedicated “return folder” to collect any costs and supporting documentation from the field. Those orders are now quickly reviewed and approved by the office. And because Egnyte tracks versions and who accessed the document, there aren’t any questions about approval decisions.

As Egnyte is a cloud-based, centralized document solution, everyone can access project files no matter where they are. Supervisors in the field use their mobile devices to go directly to the designated folder in Egnyte rather than searching through old emails or paper files. Teams use links to files and folders instead of attaching large PDFs, so even in low bandwidth locations they can access information quickly for improved communication and collaboration.

The ability to exchange files directly with clients and teams in the field by uploading to dedicated folders reduced the need to print multiple sets of plans and scan hundreds of individual documents.

Blackmon-Farrell was able to save time and money with the Egnyte platform in several ways:

“In the past, we would have to keep a physical folder for each purchase order for each client. Considering the volume, it wasn’t manageable.” Yatteau said. “With Egnyte, I can keep everything organized and stay on top of what’s been reviewed and approved.”

Teams use Egnyte’s native integration with Bluebeam to view, mark up, and share plans directly from their mobile devices. Because they’re no longer reliant on paper records, the company has significantly reduced printing costs and eliminated the need to drive from jobsite to jobsite to deliver those plans.

And by emailing links to documents instead of attaching large files, Blackmon-Farrell has dramatically reduced its wireless consumption, saving $40 to $50 per user in monthly data bills.

Blackmon-Farrell is realizing the benefits of becoming a digital organization - lower costs, easier access to data, faster processes, and greater productivity – all of which result in an improved bottom line.

"If we lose a day on a project — 10 people all standing around — that ends up costing us a lot of money."
Mike Yatteau
VP of Operations, Blackmon-Farrell